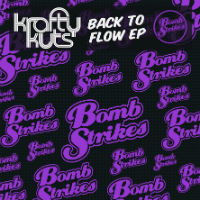 After a brace of funky hip-hop classics earlier this the year – one of which (It Ain’t My Fault) featured on his genre-spanning All 4Corners LP, Krafty Kuts gets Back To The Flow to show the yout’ how to do the wobble on this new two-tracker. The title track opens with wah-wah so squelchy you could give it a right old squeeze and still have moisture to wash your car and your neighbour’s. Not that you’ll be at all inclined to get involved in nonsense like that when the beat comes in and heavy synths go head-to-head with a vintage rapapella. And if you dig that, you’ll be more than ready for round two on the Get So Ill which uses a similar recipe but is arguably even more banging.
(Out 29 Sept. on Bombstrikes)

Posted on 23rd September 2017 no comments