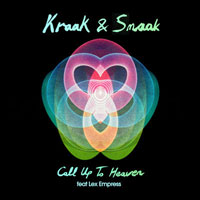 I have read that Kraak & Smaak’s name is not a drugs-related gag but a reference to a Dutch proverb meaning ‘crunchy and tasty,’ which puts me in mind of those well-known English idioms ‘coke and dope’ and ‘speed and weed’ meaning, ‘are you taking the piss?’ and ‘I might not speak Dutch but that doesn’t mean I believe you,’ respectively. There’s no doubting ‘Call Up To Heaven’ on the other hand which is straight-up mid-tempo populist breakbeat soul-funk. A seventies wah-wah intro gives way to piano rhythms and vocalist Lex Empress does a vaguely Bassey-esque vocal which goes a bit nineties neo-soul on the chorus as big sweeping strings swell and you suddenly notice a couple of plastic palm trees that weren’t there before. Nice retro bowling/ blaxploitation vid though (see below player)…
(Out now on Jalapeno)
Kraak & Smaak – Call Up To Heaven (feat. Lex Empress) by Jalapeno Records

(PRESS RELEASE) Kraak & Smaak continue to build the pressure in advance of their 3rd album Electric Hustle with the release of the single Call Up To Heaven. Featuring the distinctive vocals of Lex Empress – the front woman of their incredible live show – it is a funk-fuelled slice of melancholy pop with a seriously catchy hook. The single has already been made Tune of The Day on Los Angeles tastemaker station KCRW and was given a world exclusive on the breakfast show of 3FM – Holland’s national pop radio station. It is also a new entry this week in the DMC Buzz Chart. Remixes come courtesy of Balkan house maestro Gramophonedzie and Jalapeno label mate Smoove.