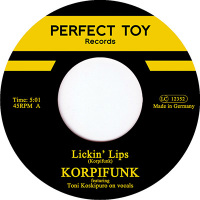 Ministers of the new super heavy Finish funk, Korpifunk, drop their opening salvo – the Lickin’ Lips Vinyl 7″ on Perfect Toy Records in just over a week and provide plenty of evidence that they’re ones to watch. The five-piece outfit from southern Finland are all about the grooves – a fact immediately clear whichever track you play first. The A-side is a bassy mid-tempo chugger on which singer Toni ruminates on the little-known fact that most women seem to like wine instead of Scotch – though he’s clearly he’s more bothered about watching them lick it off their lips anyway. The perv. There’s no respite from B-side Raindogs either which ups the bpms and brings things even heavier nor, indeed, on digital bonus cut Village Fools which adds vintage synth melodies atop tight drums and features a heavy, heavy surf-rock guitar breakdown. Very promising.
(Out 18 August on Perfect Toy Records)

Posted on 9th August 2017 no comments