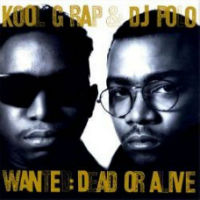 Holy shitfire! Classic hip-hop doesn’t come much heavier than Kool G Rap and DJ Polo, and their output doesn’t come much heavier than ’89’s Road To The Riches or ’90’s Wanted: Dead Or Alive – it isn’t called the ‘golden era’ for nothing. Both of these are now dropping in expanded edition 2xcd sets to include all those hard to find alternate mixes off the twelve inches and yield not a few that are even better than the album cuts – to wit Large Professor’s remix of Bad To The Bone and the club mix of Talk Like Sex – arguably one of our man’s best known cuts. Speaking of which – there’s a lyrically clean song – “I’m hitting hookers by the dozen/ Making ya wetter cuz I’m better than your husband.” Don’t leave your old lady hanging round by G, then.

Road To Riches and Wanted: Dead Or Alive were the first two albums in a four album, seven year partnership between G Rap and Polo and they were never funkier than on these two. That might be because G Rap’s Juice Crew homie Marley Marl was also on production on both albums and, in the case of Wanted… so were Large Professor and Eric B!

Regularly riding high in ‘all time best of’ lists of rappers, Kool G Rap was massively influential and is widely regarded as having paved the way for many who came after – including some of the biggest. Indeed, if Kool Moe D is to be believed (and he probably knows what he’s talking about as a founder member of pioneering rap crew Treacherous Three formed in ’78) – the list would include Biggie, Nas, and Big Pun…Brucie bonus vids below…
(Out 17 September on Traffic Ent.)