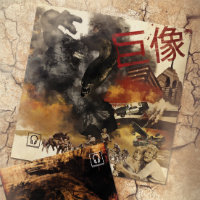 A while back MB covered the release of Stateside funk crew Big Pimp Jones/ Hot Peas & Butta‘s latest funk soundtrack to a movie that doesn’t exist – Godzilla pastiche Kodoja: Terror Mountain Showdown. The movie still doesn’t exist but a five issue kaiju comic is on the way with the first issue out in December and the subsequent four to follow monthly thereafter.

The crew behind the project say, “We love movies, but with all due respect this is a story meant to be told in comics. With some imagination and far less constraints, we can do things using the comics medium that can’t be done in cinema” adding, “…[and]…let’s be honest, there can never be enough giant monster stories out there.” Well, quite – and in any case the artwork looks stunning. This is what comes of adding darker orchestration to your seventies funk jams. Someone gets their doom on and before you know it, the big booty chicks in afros are out the window and it’s all eighty-storey mutant lizards biting skyscrapers in half and flattening cars with their big flapping feet. Full promo vid below and soundtrack on player below that.