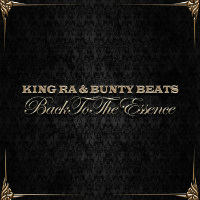 Here’s the second chunk of rudely healthy boom-bap today this time from King RA and Bunty Beats with Back To The Essence which is yet another UK production/ US emcee hook-up though this time around we’re in heavier territory. In terms of Bunty Beats‘ production think 7L and Mighty Mi territory and you’re ball park. King RA’s also on hand of course to provide the kind of solid rhymes from NJ intended to leave other rappers feeling like they’re running on empty or as he puts it, “I’m never lost for words they come to me/ Like bread for the birds – it’s absurd – I’m an anomaly.”

The musical manifesto on Back To The Essence is no secret either – it’s right there in the title and further clarified in that of track Golden Era which puts bluntly – “This is hip-hop, not hip-pop.” Should you feel the need to be pointed in the direction of the best cut you could do a lot worse than head for No Copy whereon King RA gives the best indication yet of who exactly is doing his head in, “Why these rappers nowadays rockin’ dresses/ I had to address this.” Indeed – though as I’m sure he would agree – if the rappers in question would simply make some decent music – RA would probably be fine with them in a mankini and thigh high boots – though Parliament might have had that look covered back in the day. In the meantime there’s this. Player and No Copy vid. below.
(Out now on Mixkings Records)