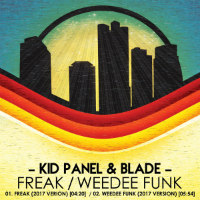 Kid Panel & Blade revamp a couple of oldies for 2017 on this new Mustbeat drop. The first is Freak which shares a name with Chic’s most famous cut and includes samples from Sugarhill Gang and Ultramagnetic MC (among others) employing pounding drums that keep it just the big beat side of house and take it back to – oohh at least 1997. Weedee Funk on the other hand features a more syncopated (though somewhat insectoid rhythm), synths that may endear it more to breaks heads and a Bun B vocal draped (see what I did there) over a beat more funky and decidedly less crunky than that on which it originally appeared.
(Out 24 March Juno exclusive/ 13 April globally on Mustbeat)