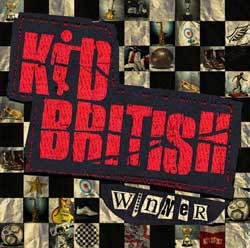 Does Kid British sound like a character in some kind of the Nazi Beano-style comic to you too? There’s even skinheads in the video – albeit very embarrassed looking ones – as well they should be considering the dance they’re doing. It’s ok though, because these are obviously nutty-boy/ goodies-from-This Is England type skinheads as the band has a black singer. As for that video – it’s like a giant mod-cliché bird (which I might just have invented) flew over the set, shat out it’s insides and then dumped it’s own carcass on top. Scooters, Paul Weller haircuts, I think there’s even some clothing that the Style Council used to wear being giving an airing at points. Nevertheless it’s a competent-enough guitar-y northern soul pop-stomper that might have had to beat it’s way to the top ten when released later this month, except for the fact that, because Plan B’s already done all the groundwork, it’ll be little more than an easy stroll. Or scooter ride.
(Out 28 June on Modern English Records)