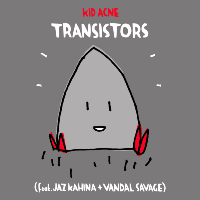 The dream team of Kid Acne and producer Spectacular Diagnostics returns with a new single in the form of Transistors. Over a summery slice of psychedelic boom-bap courtesy of the Illinois-based producer, Acne holds forth in company of London and Nottingham emcees Jaz Kahina and Vandal Savage respectively. But what could they be holding forth about? Surely Transistors can’t be a paean to one of the building blocks of modern electronics or perhaps to the type of radio that makes use of them? Well, I’m certainly receiving something over the ether and that is that our Kid’s long-running fascination with all things fantastic, mythical and conspiracy-based. He’s name-checking frost giants, an alien alliance, palm pilots, pangaea and asking an earth goddess why we are here – in other words as gloriously batshit as ever. But what if we check the frequencies on which Kahina and Savage are broadcasting? Well the former thinks the web is over and is watching you, watching her while the latter reels off bars about hieroglyphic codes, pyramid stones and the stars aligning. Houston – an uplink to ancient astronauts – my bad ancient ancestors – appears to have been established in South Yorkshire and they are transmitting the goodness right now!
(Out now on Lewis Recordings)
TEXT COPYRIGHT: Stone Monkey/ monkeyboxing.com (2021)