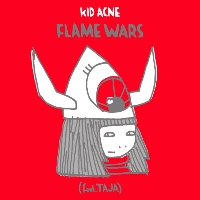 Did you know Kid Acne’s got another new album called Null And Void on the way already? Well he has and here’s the next single Flame Wars which should certainly warm things up for your ears. Our Kid and Taja go head-to-head on the mic over another glorious beat from Spectacular Diagnostics that wouldn’t be out of place on a DOOM or Czarface release. References to mythology, pop culture and UK culture abound – you name it – Hyborea, Bladerunner, Alien: Covenant, El Dorado, and crucially, “Fight Club in Matalan car park at midnight.” But which one is Kid Acne and which one is Taja? Well, among other major identifying factors there’s the small matter of differing regional accents, but above all else Mr Acne can always be distinguished from the moment of his entrance since he raises his voice at the end of A SENTENCE! And we wouldn’t have it any other way.
(Out now on Lewis Recordings)