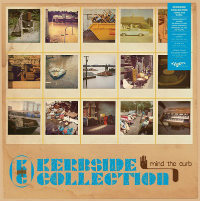 If you insist on taking jazz with your funk, you could do a lot worse (and people frequently do) than take a leaf out of Kerbside Collection‘s book. Here’s a band whose debut long player Mind The Curb gets things right on several levels in the course of delivering its payload of funky notes from the west coast. That’ll be Australia’s west coast of course since the band hail from Brisbane but – hey – the vibe is firmly that of sixties/ seventies California – think The Crusaders and early George Benson.

Recording your shit old-school analogue style for that ‘blimey – there are actually some middle frequencies on this!’ warmth is a winner for starters. Having a b-boy cover of Dizzy Gillespie classic ‘A Night In Tunisia’ is another. Plus it’s actually quite refreshing to hear a funk band out of Australia play some sort of funk that isn’t trying to squeeze onto the country’s already massively overcrowded funky-soul/ deep funk axis. They don’t overstay their welcome either what with only eight tracks in thirty-six minutes. Not that anyone should feel short-changed though as band drummer – DJ Paprika – has also put together a Mind The Curb dj mix containing bumps from the band amid a mixture of funky classics old and new – cop it off the bottom player below.
(Out now on Legere Recordings)