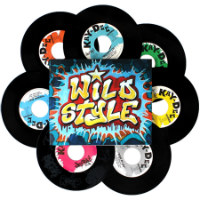 “Man, I saw your female with them, too. What’s up with her? I hear that she’s been giving that stuff out to all them graffiti guys.”
“Yo, shut the fuck up, Chico, man!”
“I’d paint three of those murals for some of that ass.”
Yeah? And how about some of this ass? The first ever studio release of all thirteen original breakbeats created for and used on legendary old school graff/ breakdancing flick Wild Style! All on dinked 45 packaged as part of a book in Kay Dee’s new – er – book series! All re-EQ-ed and extended by Kay-Dee label owner Kenny Dope! All (since this is part of a collaboration between Kay Dee and premium historic hip-hop repackagers Get On Down) as part of a premium release that comes with liner notes, unreleased photos and all the usual deluxe guff that accompanies these drops!

Did you know that these beats originally came about as a conscious decision of Wild Style director Charlie Ahearn not to use well known dj breaks of the day and instead employ Fab 5 Freddy to create some new ones? Which resulted in a bit of hustling on the part of Freddy since he wasn’t actually a producer – though luckily a cameraman on NY cable access show TV Party with access to various musicians. Did you know that only one hundred white label 12″s were ever made of the original run of Wild Style Breakbeats or that only five of the thirteen were ever used in the film? Did you know that none of the original breaks were much more than a minute long? No? Know your hip-hop history fam!
(out 12 August on Kay Dee/ Get On Down)