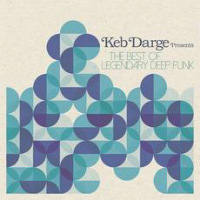 Legend (what else?) has it that after a career as a northern soul dj in London in the 80s, Darge was forced to sell all his northern soul wax to pay for a divorce. Bowed but unbeaten, our man realised there was a future in playing the more sinuous grooves of funk to dancefloors. And when I say ‘funk’ – I don’t mean the sort of jazzy abomination peddled by the acid jazz scene but something…deeper. Which is to say rare (you’d expect nothing less from a man who can a) persuade people to lock him inside a warehouse full of records for the night on a digging mission and b) identify whether a record will contain anything worth listening to just by looking at the label) and, often, raw. Anyway – a movement was born – which brings us to this.

For his compilation of compilations and highlight of highlights, Darge has picked out no fewer than twenty-one tracks. The album actually kicks off with a brace of disco-leaning tracks (King Tutt’s You Got Me Hung Up and Harris & Orr’s Spread The Love) which might seem a little unexpected (but then Darge was a champion disco dancer in a former life) before the appearance of something that sounds more like what most would associate with the term ‘deep funk’ – Cross Bronx Expressway’s self-titled cut – recently re-pressed on Rocafort Records. Highlights include Zebra’s pumping seventies cut Simple Song (not a Sly Stone cover), the blaxploitation-funk of Joe Washington’s Blueberry Hill, the JB-ish vibes of Rickey Calloway’s Tell Me, Ronnie Keaton’s Going Down For The Last Time (drum break alert!) and of course Carleen & The Groovers bass-monster Can We Rap. Also included are three edits put together by two of Darge’s most notable fellow diggers – Ian Wright and Kenny Dope. Nice work all round. Almost worth getting divorced over, in fact.
(Out 28 October on BBE)