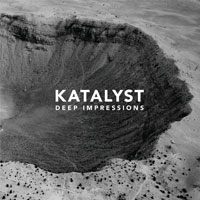 “Many styles of music have made deep impressions on me,” says Oz producer Katalyst with a cavalier disregard for labouring a metaphor as he discusses his latest LP Deep Impressions which sports an image of a ‘deep impression’ in the form of what seems to be a meteor crater on its cover. Presumably, also, his intention was that this LP would make a ‘deep impression’ on audiences – so it’s just as well that it’s a rather robust fourteen track selection.

Given our man’s words it also shouldn’t come as any surprise that his new full-length effort features ‘many styles’ (soul, funk, hip-hop, reggae, electro, bit of rock, more hip-hop) served either ‘neat’ or as ‘mixers’. It also features (as has been his wont in the past) a selection of A-grade vocal collaborators – Stephanie McKay, Bootie Brown, KweenG, Coin Locker Kid, Hau, and Buff 1.

The two singles are probably the best tracks on it and the first of these is the excellent acoustic rocksteady number and Stephanie McKay vehicle Day Into Night from the summer. The second is the more recent uptempo reggae-funky hip-hop of Ready To Drop complete with added KweenG to get the party started. I also have a particular soft spot for the funky instrumental Pot Or Pills with it’s almost Velvet Underground/ Sweet Jane-esque riff.

I’m not sure there’s anything on Deep Impressions I’d require with me if banished to a Desert Island but Katalyst nevertheless seems to have a produced something of a well-rounded whole and the LP is a turkey-free zone. Bernard Matthews would never approve. But he’s dead so who gives a shit what he thinks. Full press guff below player.
(Out now on BBE)

(PRESS RELEASE)
Katalyst has his own unique brand of music that encompasses 25 years of record collecting, DJing and music production. The latest product of Katalyst’s audiophilliac obsession is ‘Deep Impressions’ an album that brings together the soul, hip hop, funk, jazz, reggae and electronic music – deconstructed and distilled into what is perhaps most accurately described as ‘the Katalyst sound’.

Duke Ellington once observed that music cannot be categorised – neither into jazz nor classical, not into rock or soul or folk or anything else. There are, stated Ellington only two kinds of music – good and bad. Katalyst seems almost aggressively aware of this – for this we are all the richer. In this album, Katalyst offers an assortment of tunes so disparate as to resist classification under any other heading then the title. ‘Deep Impressions’ suggests the enormously varied types of tunes that engage Katalyst’s attention every day – any day – in his life. As to the company he keeps of this LP, the Pharcyde’s Booty Brown needs no introduction, nor do the accomplished Stephanie Mckay and Steve Spacek. Previous collaborators Hau, Mr Clean, Buff 1 and Jade Macrae joined by the talented KweenG and Coin Locker Kid, elevating good music to greatness.