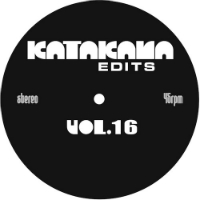 Konichiwa! It’s Katakana Edits time again. Actually, I don’t know why I’m saying ‘Konichiwa.’ For all the fact that it’s named ‘Katakana Edits’ the label hailing from ‘Planet Groove, Jamaica’ definitely isn’t Japanese. Mind you it definitely isn’t Jamaican either. And if I did pinpoint its actual geographical location for you…I’d have to kill you. Like that’s important anyway. What is important is that it’s a label that drops quality four or five track EPs of nufunk/ reggae/ disco bootlegs on a semi-regular basis. Anyway, they’re up to Vol. 16 now and it’s a twenty-two tracker. Wait – what? Twenty how many tracks? Yes – twenty-two tracks, you did read that right. They’re celebrating two years of successfully avoiding sample litigation with a mixture of new bullets and old bangers, you see. Consequently, those that missed The Gaff‘s classy Mambo No. 5 edit, Timewrap‘s storming Velvelettes edit and Manjah‘s ice cold My Dub Is Empty the first time around can make reparations for their lack of attention. Simultaneously, they can avail themselves of new cool in the form of Clairvo‘s natty Hopeton Lewis reskank Shakka Boom, Morlack‘s banging Harlem River refix and a groovy Donna Hightower reversion by Manjah. Yes, him again. And it’s not like the rest of it is to be sniffed at either with the a fair sprinkling of electro swing enlivening the mix.