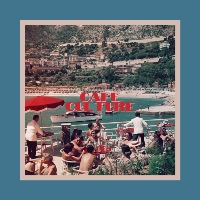 Fresh from the success of the summer’s Oxydental album on which he married eastern music samples to dusty, lo-fi drum breaks, London producer Kamau Kuru returns with Cafe Culture on which a similar aesthetic is applied to the sounds of the French and Italian riviera from the 50s and 60s with a similar wry touch when it comes to using vintage newsreel vocal samples. For yes, this is a tribute to an era when Soho’s coffee-houses played host to the nation’s youth counter-culture.

As on its immediate predecessor, none of the tracks outstay their welcome – and most on this clock in at around one to two minutes long. Not that you’ll be bothered, since, as with Oxydental, you’ll be wanting this to play from start to finish rather than skip tracks. That notwithstanding, Kuru has actually release three singles off this already – Nu Blu (resolves into cinematic summery breaks and blissfully vocal loops after an opening of vintage vinyl hiss and a French count-off), Heat (stuttery drums, church organ and muted vocal samples) and the monkey’s favourite of the three Honey (lazy retro guitar twang over fuzzy bass and thick drums) which doesn’t just conjure the smell of Espresso so much as the whole Med. experience, right down to Vespa fumes. Elsewhere, Sugar Pills messes with the same Belgian jazz-band sample used by Aim on Ain’t Got Time To Waste, Milk sounds like it uses the clack of pool table balls for a percussive sound and Moka Express even gets up to DnB speed. The monkey’s favourite cut though is the organ-led Fellas which opens with an RP-voiced announcement that ‘a new cafe table society is growing up in Wimbledon.’ Who knew? In short it’s a listening experience that’ll have you strolling along Riviera promenades in your mind (just like Beatniks from back in the day in fact!) and, let’s face it, is probably the closest you’ll get to the real Riviera from now on given the Covid-induced collapse of low-budget air travel.
(Out now HERE)

Posted on 12th December 2020 no comments