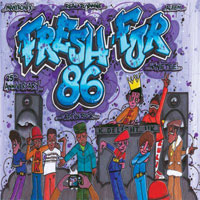 K-Delight goes super old-school for the imminent UK Fresh 86 reunion at the London Scala on 16 July and gets his analogue on for a new mixtape. That’s right, he recorded the whole thing on multi-track tape using some fat original electro vinyl. Naturally he is aware that it is 2011 so the whole thing is available for your aural delectation below via the soundcloud player. If you don’t already know ‘K-Dilla’, he’s been dropping rude mixtapes repping the old school sound since the old school was current and released a superb album Audio Revolution in 2008. If you don’t know about UK Fresh ‘86 it was pretty much the main shit as far as hip-hop events went in the eighties and is so enshrined in hip-hop lore that lots of aging b-boys will no doubt be heading to the big smoke for this month’s Street Sounds UK Fresh Reunion. Time to dust off them Puma Suedes again! Full tracklist HERE.

(PRESS RELEASE)
The 5 month labour of love that is ‘Fresh For 86’ by turntable scratch assassin and UK producer K-Delight has been recorded using all original 80s electro vinyl. K-Delight has kept this mix as authentic as possible by recording the whole mix onto multi-track tape! Yes, that’s right, we said tape. Hell yeah. K-Delight made his name on the UK hip-hop scene in the early nineties with his dope 4 track mix tapes. Now with the UK Fresh 86 reunion happening this year, what better time to create a pure old school mix not only in sound but in the recording method too. Once ‘Fresh For 86’ was mixed it was then cut the hell up using Cubase to give some extra edit power paying tribute to edit king Chep Nunez and, of course, the man, Mantronik. Throughout the mix there are cuts and samples from classic Mike Allen Radio shows, audio from the original UK Fresh 86 event as well as sneaky snippets of Morgan Khan’s vocals and words of wisdom from Arthur Baker! Even the artwork was specially commissioned from North East England graffiti legend Nikos who has kept it old school as hell and fits the vibe perfectly. There are some special limited edition CD copies with dope graff sleeves and stickers. These will be given to the lucky people going to the UK Fresh 86 reunion at the Scala in London on 16 July 2011. There will also be copies available in the cooler stores around the UK. These are free so grab one if you see one baby! The tracklist is insane, pure classic electro anthems from the 80s. Full tracklist is available on the Fresh For 86 blog.