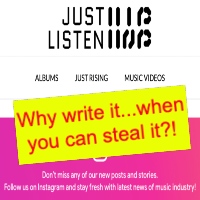 Well there we go, I said it – justlistenhiphop.com are copyright thieves. Well – you’ve got to call a spade a spade haven’t you?  This is the blog that has ripped-off every last word of the last fifty posts written by the monkey on monkeyboxing.com from 27 May to 11 August (Update: it ended up being around seventy posts ending mid-September 2021) and they’ve done it without permission, with no source credited and posted under a variety of names. Not just the monkey either, they’ve also ripped-off undergroundhiphop, legendswillneverdie, weeklyrapgods and ep4pro among others. And they haven’t credited those blogs either, just ripped-off the content once again and posted under another name. This is totally illegal and infringes copyright law in both the UK and U.S.  It’s not a victimless crime.  No-one stumbling across the stolen content has any reason to believe it is anyone else’s hard work.  Not only that but duplicate content affects Google search rankings.  Search engines can’t really tell who is the original source – especially when content is copied on the same day as posting – the end result is that everyone suffers.  You spend hours researching and writing (for the love of course, blogging about music isn’t a noted goldmine) and then along comes some lazy biter and scrapes your content, re-posting in seconds.  Meanwhile, despite all the effort and slogging you have put in, you slide down the Google search rankings.

So what can you do?

1. Well, the first general bit of advice seems to be, send the offenders a polite email asking for the offending work can be removed – you know, just in case they accidentally hit Ctrl C and managing to nab your entire post plus images multiple times.  This is slightly more difficult because in justlistenhiphop.com’s case their blog has no contact details or even a comment facility; it’s almost like they don’t want you to contact them for some reason.  You can hit them up on social media of course – as the monkey has done on their Instagram, Facebook and Twitter accounts – but these messages were all roundly ignored.

2. While you are waiting for a deafening lack of response from the above overtures, you could also (labouring at this point under the assumption that it is only one post that has been stolen and only hip-hop related ones that might be targeted in future) include a footer in your next post such as this:

(Note to ‘Irfan Ahktar’ and the rest of the justlistenhiphop.com crew in case you’re thinking of plagiarising the Monkey again – screenshots have been taken and you’ve got 5 days to take down my Bronx Slang review that you copied and pasted without permission or credit before further action is taken. Try writing instead of biting.  Have a great rest of the week!)

Imagine your surprise to discover that this and the entire post preceding it have turned up on the offending blog within a short while of your original post going live. Mind you – that does suggest that your content is being stolen on an automated basis – more about that in a minute. Meanwhile for an example of how stupid the people behind this blog are check the monkey’s recent post on Run For Cover – then have a look at the image below which copies and pastes the entire thing including a warning directed against both justlistenhiphop.com and the joker who posted my piece: 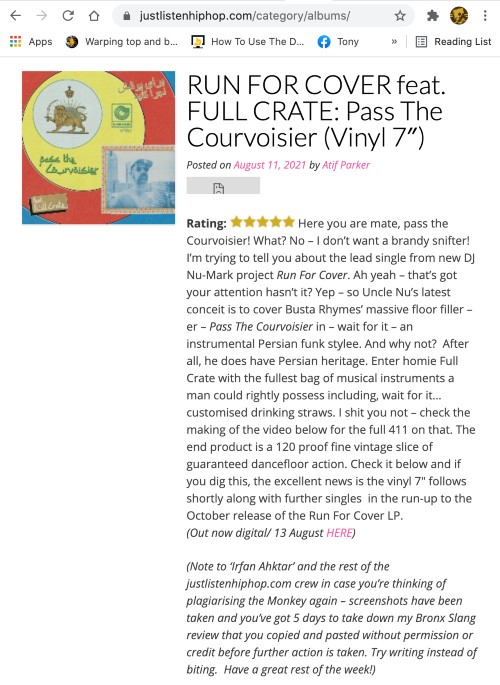 3. Then you can find out who hosts these lazy shysters by doing a Whois lookup.  In this case, our plagiarists de jour are hosted by GoDaddy.  Now GoDaddy have a strict policy on copyright infringement stating, “GoDaddy is committed to helping you protect your legal rights.”   In my case I had to fill in a copyright infringement form and (for good measure) email them as well listing all 50 stolen posts and the 50 corresponding urls at justlistenhiphop.com. Naturally this has all been done with bells on.

4. You can also report the issue to Google (you know the megacorp with questionable morals whose decades-old search engine technology should by now be sophisticated to pick this sort of shenanigans up and deal with it inside the two plus months it has failed to in this case) but they want you to fill in a separate field for each url at which stolen text can be found and a separate field for each url where the stolen text appears.  In other words 100 fields in my case.  Cheers Google.

5. If you have a WordPress site, you can install a plugin that prevents right clicking, dragging and copying of images and text.

6. If your stolen content appears to be automated – why not flip your RSS feed off for a bit.

7. And of course, if your content is being stolen via automation – why not temporarily switch off your new copyright prevention plugin and write a blog post about how your hard work is being stolen by lazy, ignorant thieves such as those behind justlistenhiphop.com!? Could it be that this too will turn up on their website? Let’s find out!

UPDATE 1: Six hours after posting guess what should appear on justlistenhiphop.com’s website. Yes, you have guessed correctly – they are now the proud hosts of this blogpost – minus this update of course – enjoy the image below. Further updates below image 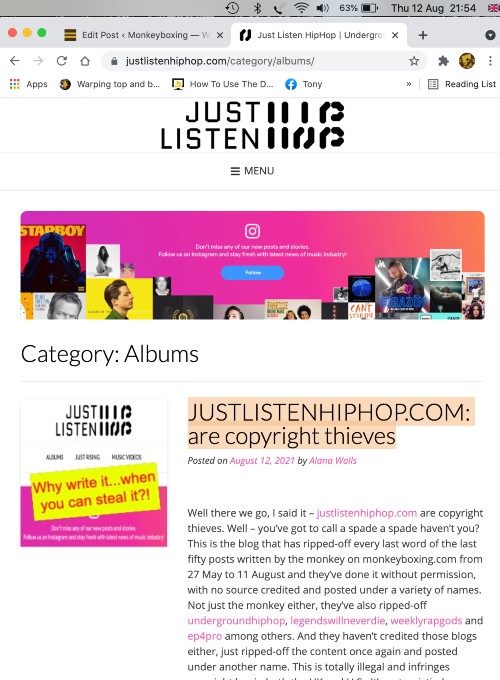 UPDATE 2: Following the above and in the deafening absence of a response from Google, I had to spend a couple of weeks messaging back and forth with various big tech companies as follows to get my stolen content taken down – as below:

GODADDY: Godaddy responded within a few days saying they were only the registrar and not the host of justlistenhiphop. They said that ‘as a courtesy’ they were telling me that Cloudflare Inc. provided DNS Service to justlistenhiphop and could tell me who the host was.

CLOUDFLARE INC: I contacted them via their webform and they didn’t respond at all. I then tried to phone their UK number. The tech support number led to a message saying ask for help online so I tried their sales number. This eventually led to a callback and an employee telling me I might have more luck if I signed up for a free Cloudflare account and put a ticket in on that. I duly did this and waited.

INTERMISSION while I contact ICANN: “ICann’s mission is to help ensure a stable, secure, and unified global Internet” so you can contact them if someone e.g. a host is doing something dodgy. I report my case to them and there’s a bit of tooing and froing. They tell me I need to get back to them by such-and-such a date. I hope Cloudflare get back to me in time or I’ll have to report the whole damn thing again.

Back to CLOUDFLARE: Two weeks later (after Cloudflare had claimed to have dealt with my ticket and unfortunately, after ICANN had closed the case I had raised with them) they told me that justlistenhiphop’s host was abuse@godaddy.com. Gritting my teeth, I then had to point out that this was a fucking email address and they needed to try again. When they tried again, they said Godaddy was the host. Since Godaddy had already denied this, I asked for confirmation. The reply insisted Godaddy was the host and suggested I tell Godaddy this and tell Godaddy to contact Cloudflare if they had a problem with this.

Back to GODADDY: I email Godaddy again (who claim they are “committed to assisting intellectual property owners in taking action against IP infringement”) with a screenshot of Cloudflare’s latest message and Godaddy suddenly discover that – er – they are hosting justlistenhiphop after all which means that – er – they have been hosting stolen copyright content. They get the stuff taken down and apologise for misleading me, wasting my time and being the cause behind my plummeting Google ranking. Oh, wait, no they don’t – they just get the stuff taken down – and don’t apologise at all. Let’s all remember manners cost nothing but rudeness can be very expensive – hello Trustpilot reviews…

UPDATE 3: And then…suddenly…out of the blue, on 25 September 2021 (i.e. four months after they started stealing my content, a month and a half since I messaged them about this on Instagram, and some weeks after Godaddy have forced them to remove all content stolen from me)…justlistenhiphop start following me on Instagram and finally reply to my Instagram message!

“Hello, sorry for your bad exeperience (sic) we can credit you, send us your Name (sic) and credit info, and delete posts about us…And we will take out articles from our website Please provide us your firs (sic) and last name so we can give a credit” 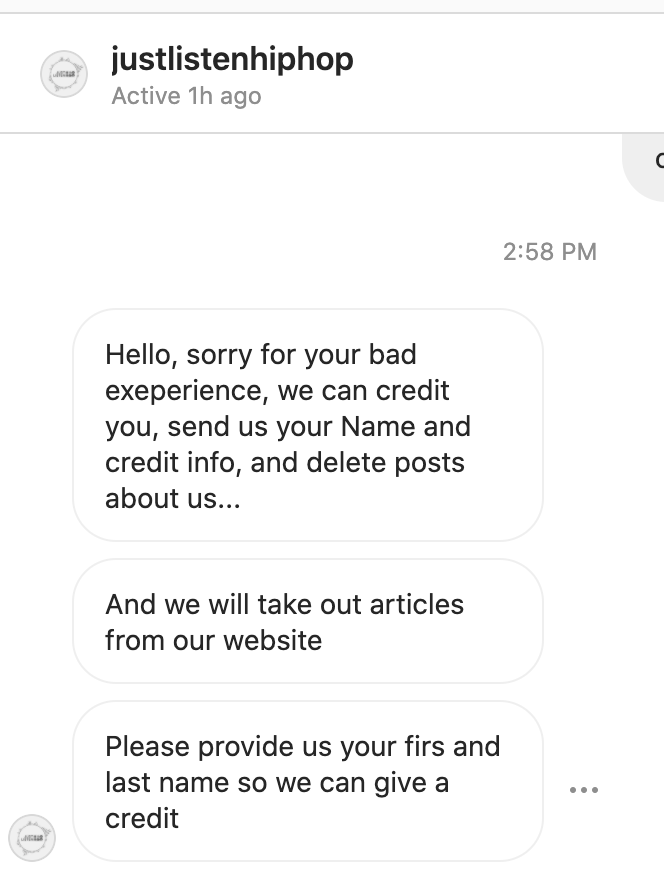 Yeah, right. The morals of this story? Big tech talks the talk about copyright but they’re mainly full of shit and don’t walk the walk. Pretty much any lazy thieving scumbag under the sun with a bit of knowledge can pilfer your hard work, render your name and site’s rep. and ranking worthless and get away with it until – you guessed it – you a) find out and b) put in a shitload of hours you don’t have to get the situation rectified. It’s not easy being a blogger.