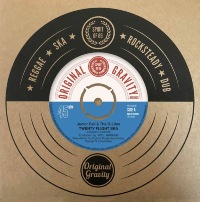 New retro Jamaican style heat from Original Gravity on Twenty Flight Ska one as Eddie Cochrane’s 1956 rockabilly classic Twenty Flight goes through the makeover treatment. And it emerges none the worse for its transformation as something at the slower end of ska that could have come out of an Orange Street studio or record store five to ten years later in Kingston. As things pan out it is that very same epicentre of 60s Jamaican music which provides the inspiration for the largely instrumental B-side Orange Street Breakdown. Rather than ska however, this one stylistically occupies the sometimes hard to distinguish borderline between rocksteady and early reggae. And it might just be the monkey’s preferred one of the two! Don’t hang around though – there are only 300 copies of this one.
(Pre-order now; ships October on Original Gravity Records)

Posted on 20th September 2021 no comments