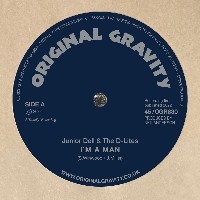 It looks like a Bluebeat label on the 45, it sounds like a bluebeat act and the song was written long enough ago to have been the source for a ska cover. But that’s just because the Original Gravity Records machine is adept at pastiching pretty much whatever the hell genre and era it turns its hand to. I say ‘its’ – obviously I mean tireless label mastermind, Neil Anderson, who for this release has aimed his sights squarely at first generation Jamaica ska. And so it is that Junior Dell & The D-Lites (a.k.a Neil and a session singer) deliver a splendidly convincing ska version of Spencer Davis Group’s I’m A Man. What’s not to like? Over on the flip, Woodfield Rd Allstars (a.k.a. probably just Neil) deliver a slower skankin instro number.
(Pre-order now/ Ships early December on Original Gravity Records)

Posted on 27th September 2022 no comments