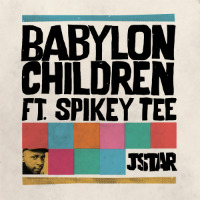 Is that the Notting Hill Carnival coming up? I believe it is! If I were reggae producer JStar, I’d make sure I had a single in the offing. He does! Babylon Children featuring vocalist Spikey Tee is a cut from recent JStar LP Stand To Order and a digi-dub cover of Aswad’s early 80s number, African Children, about social inequality and shitty housing. How things have changed since then, though eh? Now it’s all shitty housing and social inequality. Still at least the neo-liberal mania for privatisation and outsourcing has been a runaway success. After all – look what happened when it was applied to housing. In the Grenfell Tower case – the Tory council saved a few bob and only at least 80 people got killed. Knock the charred remains of that giant concrete wicker man down and that’s prime real estate right there! Happy days. If you’re a complete fucking moral vacuum.

How to represent the effects of such a shitty attitude in audio-visual format though? Perhaps footage from the era of the Aswad single showing that bloody old witch Thatcher amid clips of council block grimness and then, midway through, a switch to righteous fury at the Grenfell manslaughter. That ought to do it! Buy this single and the proceeds go straight to the Red Cross fund for the benefit of Grenfell survivors. The Babylon Children EP finds the album version is accompanied by remixes from Dubmatix, Numa Crew and Adam Prescott & JStar as a duo as well as the ‘pella and the A Better Babylon Dub instro.