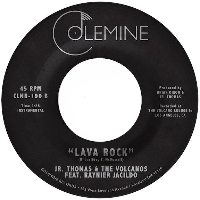 …aaannd the second of two forthcoming retro reggae drops from Colemine Records arriving on 45 in the middle of next month is this new single from Jr. Thomas featuring Sunk In The Mist b/w Lava Rock. Those familiar with Thomas’ work will know he takes his musical cues from an era that largely encompasses the first half of the 70s. Which is to say that you are as apt to find him doing ‘boss’ reggae as you are to find him doing something a little more rootsy or perhaps even lover’s rock. Sunk In The Mist certainly has a later more rootsy sound about it on this one while instrumental B-side Lava Rock has an earlier feel. If the monkey’s understood correctly, the two tracks appear to be bonus cuts from the recording sessions for Thomas’s 2018 LP, Rockstone. Time to nice up the dance perhaps?
(Out 11 February on Colemine Records)

Posted on 6th January 2022 no comments