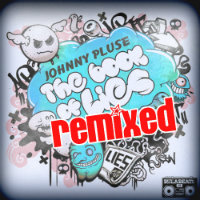 If you’re a producer, it has become somewhat de rigeur of late, to follow the release of ‘the’ album (i.e. yours) with ‘the remix album’ – i.e. by ‘them’. You know, a crew of usually like-minded individuals who, the minute they get their grubby mitts on those stems, throw the owner a sly grin as if to say, ‘this shit is mine now and I’m going to go to town on it’ and then go to town on it. A bit like when that dodgy mechanic, takes your car keys and slams the door extra hard before wheel-spinning your automotive pride and joy onto the ramp. That is a worst case scenario mind you. In this case, the owner of the stems is Johnnypluse and the remixers are Mo Matic, Sammy Senior, Crashgroove, Dusty Tonez and DJ Aka who’ve treated JP with as much respect as you can expect from a such a feral group.

As with the original it’s a kaleidoscope of bass music genres from ragga-hop to reggae, ghetto funk to DnB, and various breaks sub-genres. For preference I’d have to plump for Sammy Senior’s motor-bass funked up The Episode featuring MC Mimmic. While it’s not my thing though, Dusty Tonez certainly makes an entrance with his pounding nu-school breaks versioning of Back To The Future. Preview player below and free download of The Prowler (Django party mix) below that. No porky!
(Out 17 May on Bulabeats)