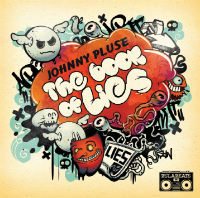 The Book Of Lies eh? Some new government manifesto perhaps? The end of year accounts from corporation tax dodgers (and Tory donors) Lycamobile? RBS’s report to shareholders about its role in the Libor scandal? How about the new album from lynchpin of the sound of the Irish breakbeat underground a.k.a. Bulabeats label boss Johnnypluse? It’s the latter of course – since, naturally, the others will be paragons of transparency and honesty.

A brief nine tracks long, the album explores JP’s new Euro trance direction – wait – hold on – my bad, sorry – that’s actually a porky. It does feature collaborations with Rita Ora, Azealia Banks and the fit one from the Saturdays though. Actually, again, that’s a bit of a fabrication and let’s face it, not especially convincing – a bit like UK government claims like ‘we’re all in it together.’ Let’s try something more convincing – this LP was actually recorded in the same studio as U2’s Joshua Tree…yeah…alright…it’s all lies – it’s not even square.

In reality this collection of ragga-tinged minimalistic 140bpm jungle and breaks is graced by the presence of MCs Coppa, Kwasi and Mimmic along with Run IniQ and the man Bass Nacho. Having spent some time listening to it, I would venture to say that it was geared towards anyone who has a penchant for raving off their tits at four in the morning whilst gurning through dry ice at the looming presence of vast unlicensed bassbins. As the video for Episode below will reveal. Truth.
(Out 22 March on Bulabeats)