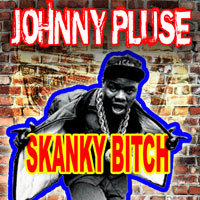 Don’t worry, Irish breaks merchant and Bulabeats label boss Johnnypluse isn’t venting about some chick. The title of this, the second single from his forthcoming How Much For The Monkey LP is more a literal description of the track itself, ‘skanky’ in the sense of skankin’; ‘bitch’ conveying the monstrous rhythm section as in, ‘Damn! That bass is nasty!” The original swaggers along indulging in minimal old-school breakisms before changing it up for the super-skankin-Musical Youth-sampling-siren-toting middle eight. And then there’s the remixes – it would almost be easier to say who hasn’t been invited along from the ghetto/ nu funk scene. All of them compete in trying to up the nastiness of the original whether it be Funkanomics’ filthy bass antics or Dusty Tonez 1990-era Rob Base & DJ EZ Rock style beat. Props have to go to Tonez in particular for foregrounding the skanking middle eight which is the best bit of the original. We won’t speak of the house remix.

(PRESS RELEASE) JOHNNYPLUSE drops his second single from his long player “How Much For The Monkey.” Skanky Bitch is a 115 BPM Ragga/Hiphop/Nufunk dancefloor missile, with loads of old school samples, sirens, air horns and a skanky bassline. This will keep em on the floor. The remixes for this weapon are even better. First up is those German Ghettofunk badboys FUNKANOMICS who turn the tune in into a savage hiphop samplin’ Ghettofunk monster. Next up is the Big Beat lovin RORY HOY, who turns the tune into a serious ragga/ breakbeat/ old school bassline beast of remix, then its on to TOTAL CULT, the Nufunker also does some serious bassline damage, while keepin the skank. Bulabeats latest wonder kid DUSTY TONEZ stays close to the original, but gives it an old school hiphop party vibe with a serious bassline to keep the ass movin and last but not least GENERIC PEOPLE drop a serious acid house ( yes house ) hands in the air rework. This arsenal of weapons will that will rock any dancefloor I TELL YA.