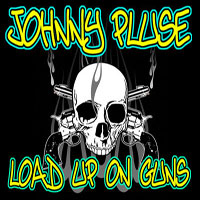 Never a man to let an opportunity pass him by, Bulabeats label boss Johnnypluse cashes in on the cashing-in of the twentieth anniversary of the release of Nirvana’s Nevermind album by putting out a cheeky retro breaks number that makes shameless use of ‘that’ guitar riff from Teen Spirit. Well, I say ‘cashes in’ – this one’s actually a free download. It’s liberally sprinkled with ragga samples and a re-playing of said riff on old-school keyboards but rest assured that it rocks out with it’s cock out when the Cobain guitar sample kicks in. Cop it off the player below…

(PRESS RELEASE)
JohnnyPluse is back with another dancefloor bomb. This time he has remixed the moshpit classic “Smells Like Teen Spirit” by Nirvana. PluseBoy uses the original samples from the song mixed with with some tight funk breaks, funky synth parts, nice chunky bass and what everyone wants…big drums and massive ear bleeding guitars. When you drop this, the Bouncers will be busy. TURN UP TO 11!!!

Posted on 29th September 2011 no comments