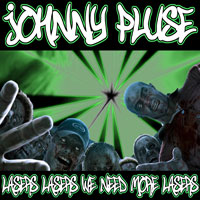 Here he is then, back once again like a renegade master – yes – it’s Irish beat assassin JohnnyPluse with new album Lasers, Lasers, We Need More Lasers – or (as it’s almost certainly destined to be known) Lasers. For those who aren’t in the know, JP is a man afflicted by ‘breaks’-ADHD – a little known disorder that I’ve just invented but which perfectly describes his clear conviction that there can never be enough breaks. So much is this the case in fact, that he can frequently be found dropping as many corkers as he convincingly squeeze into single track. Nor is he one to worry overly about (sub)genre skipping even within a track, the only requirement, it seems, is the phat content and thus he flips shamelessly from old skool ‘Prodigy’-style breaks to minimalist synth percussion, funk, hip-hop, nufunk, ghetto funk and electro. In doing so he recreates all that cutting, chopping and blending which is the stock in trade of live djs. He also continues his rather more worrying penchant for hideously lurid and garish cover artwork and this time has really excelled himself with a nastily tacky zombie attack from the point of view of the holder. In other words, exactly the kind of situation in which you might wish for an excess of lasers. Were said weapons to arrive in time one imagines the results would involve noisy, head-exploding carnage – a scene not unlike, (one imagines again) the reaction in a breaks club when pretty much anything off this drops… cop yourself a big-ass hip-hop breaks freebie off the album immediately below and listen to Lasers below that…
FREE DOWNLOAD – JohnnyPluse – It’s Some Craic

(Out 25 April on Bulabeats)
lasers lasers we need more lasers by johnnypluse
(PRESS RELEASE) Irish funky beat technician JOHNNYPLUSE drops his 3rd album, ”Lasers Lasers We Need More Lasers “ on April 25th. Album number three, and Pluse has dropped the slow jams and replaced them with 10 Funk fuelled bass heavy dancefloor missiles. Pluseboy bounces between HipHop, Ragga, Nufunk, Ghettofunk, and a good auld summer time hands in the air Indie Electro anthem. He has brought a few friends to the party also up and coming mc DOG, Mancunian legend MC KWASI, the funky vocal gipsy that is TOMMY EL and Indie superstars YOUTH MASS. All this combined with Pluses funky beats n bass means that THIS ALBUM GOES OFF IN THE CLUB OR IN THE GAFF. REACH FOR THE LASERS.