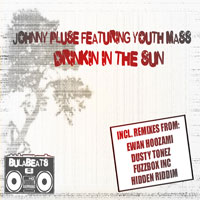 Drinking in the sun! It always seems like such a good idea doesn’t it? There you are with your workmates by a river or something, supping a cold pint, full of bonhomie…and then it all goes blurry. You ‘come to’ sunfried, dehydrated, slumped on cardboard boxes in a piss-stinking shop doorway with a half a kebab down your front wondering when it got dark and where everyone is. Johnnypluse seems to have captured the euphoric first half of this experience in a glorious, skanking ghetto funk/ breaks/ indie rock (courtesy of vocals from Irish indie rockers Youth Mass) hybrid as, indeed, have his ‘work’ mates Dusty Tonez, Hidden Riddem, Fuzzbox Inc. and Ewan Hoozami who interpret JP’s original in their various styles while remaining true to its spirit. All clearly seasoned drinkers in the sun then. Preview it via the soundcloud player below, watch the debauched video below that and read the press guff below that. ‘Ave it.
(Out 24 August on Bulabeats)

(PRESS RELEASE)
The first Tune to be lifted From JohnnyPluse’s lasers album is ” Drinkin In The Sun.” and Pluse calls on indie rockers Youth Mass to help make this massive summer tune.

“Drinkin In The Sun” is a nice skanky, funky hands-in-the-air summer anthem with choppy gituars ,vocals that remind ya of bein young in the summer-time, fat breaks and massive bassline to keep the feet on the floor.

Let’s go drinkin in the sun…….

Posted on 3rd August 2011 no comments