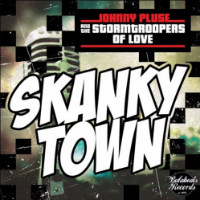 Is no-one safe? Frankly, if JohnnyPluse & The Stormtroopers Of Love are around, the answer is no. With a new album out later in the year, the Irish crew have decided to unleash the video for O Jesus Funk – a blasphemous blend of hectic 70s funk breaks, horns, 808 basslines and hip-house vocal loops that sees them wind up in early 90s territory slotting in somewhere between The Prodigy and Technotronic. Add to that a video that it is positively unwise to watch with a hangover (and I know because I’ve just done precisely that) – it’s time to flee. Oh. Too late. They’ve got you and now they’ll do rude things with glow sticks. This track will appear on the Skanky Town EP along with the manic skankin’ title track and The Nite Club.
(Out 6 March on Bulabeats)