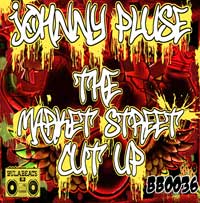 Not quite the East End gang brawl it sounds like, Johnny Pluse nevertheless brings along enough remixers for this digital re-release of 2009’s The Market Street Cut Up to almost make it worth starting a ruck. There are eleven mixes available from the likes of (deep breath) Ewan Hoozami, Quincy Jointz, Hong Kong Ping Pong, Totalcult, Mustbeat Crew, Rory Hoy, Dusty Tonez and Funkanomics. Gang leader Pluse’s skankin’ 2011 rerub sounds particularly tasty but of everyone it’s Funkanomics’ mutant ghetto breaks monster (complete with Chilli Peppers-style slap-bass) that makes them sound the most like the ones who brought a gun to a knife fight.
(Out 10 December on Bulabeats)

(PRESS RELEASE)
This dancefloor missile, was originally only on vinyl sold 500 units when it dropped in 2009, gets a full digital release. Johnnypluse decided to call on his fav producers on the scene and he managed to get an album full of remixes.

This puppy has massive remixes from BSIDE, FUNKAMONMICS, QUINCY JOINTZ , MUST BEAT CREW, DUSTY TONEZ, RORY HOY, TOTALCULT, EWAN HOOZAMI, HONG KONG PING PONG, and PLUSE himself dropping the 2011 remix and a Drum n Bass mix . So a full arsenal of weapons for DJs this festive season. 123456 DO IT!

Posted on 4th December 2011 no comments