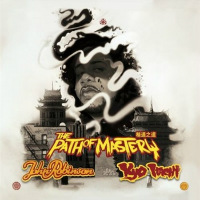 All manner of guff pops through the monkey’s virtual letterbox on a daily basis in the name of hip-hop and more than half of it ends up in the monkey’s virtual bin. But that’s because they haven’t achieved The Path Of Mastery attained only by the few. Such as Scienz Of Life rapper Lil Sci a.k.a. John Robinson and French producer Kyo Itachi. Signs that the aforesaid mastery has been achieved include lushly orchestrated boom-bap beats filled with mystical strings (imagine Adrian Younge collaborating with RZA on a manga-themed tip) and dope rhymes from a real rap shogun.

Of course you could have observed all these two years ago when this was first released but to really feel the vibe you’d want this on vinyl – a format on which The Path Of Mastery was never released. Happily though, that’s all going to change at the start of March since Shinigamie Records and Dusty Platter Records have combined forces to hail the honourable and masterful duo and ensure that 12 of the original sixteen masterful cuts survive to make it out of the gritty trenches of digital music warfare. Keep your ears peeled for album standouts Love You Like Music (featuring Contro Versy and Mato Soul) with its 40s-style chanteuse hook and bumping paean to Manga and the extent of its influence entitled – er – Manga.
(Out 2 March (or thereabouts) on Shinigamie Records)

Posted on 18th February 2015 no comments