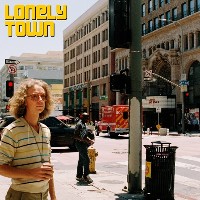 Joel Sarakula heads down the musical highway on latest single Lonely Town and pulls in at the 1970s. And I mean the 1970s. The music could be vintage Chic while the video contains vintage seventies movie footage, a seventies motel, seventies hair styles, seventies lava lamps, seventies fashion, a seventies colour palette, seventies carpet and, hell yes, seventies wallpaper! In fact there’s almost nothing about it that isn’t 1970s. Except that split second view of a motel car park at 0:09 containing two suspiciously modern-looking vehicles. It’s like a glitch in the Matrix. There you are happily grooving along, everything seventies for the last fifty years (assuming a five decade-long ‘decade’ hasn’t struck you as weird) and then something strikes you as anachronistic. A bit like this one’s lyrical content which (the PR says) “presents a futuristic, dystopian city…where citizens are completely beholden to their screens and their jobs …” Whereas in the 70s, screens were few and far between at work and – er – alright, there were some unemployment issues so they might have been beholden to their jobs. Still – do you ‘look behind the curtain’ or go on happily groovin’? Groovin’ it is then!
(Out now on Légère Recordings)

Posted on 28th November 2022 no comments