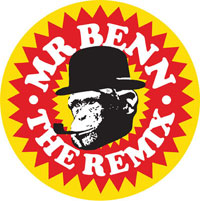 Personally, I would have paid cold cash money for this on a slice of wax since Mr Benn has once again delayed his own solo LP to apply his boom-skankin Midas touch to folksy-roots-hopper Joe Driscoll’s original. However, in the words of Mr Benn himself, “Just got the word from Joe D, this is gonna be released on 26th April and even better, it’s gonna be given away absolutely free.” Free yes, but alas, digital-only, wax heroes! Ironic really, seeing as how the lyrics are a paean to creating analog mixtapes for the ladies and the only way this track will even appear to get an analog airing is via smug Serato soldiers and their sinister time-coded vinyl platters. Have a gander below and mark 26 April in your download diary… Free download via ‘down’ arrow in player below. Happy days!
Joe Driscoll – Mixtape Champs (Mr Benn’s nod to the creator) by Mr Benn

(PRESS RELEASE) Joe Driscoll is posting two remixes of the title track from his new album ‘Mixtape Champs’ for free download tomorrow. The new album will be released May 23rd on Localization Records, just in time for the summer festival season with remixes from Skitz, Mr. Benn, Tom Caruana, Eddie Rankin of Gentleman’s Dub Club, Jon Kennedy, and Don Hendicutz. Currently on tour in the U.K., he will be appearing at many of the finest festival stages through the summer: Glastonbury, Secret Garden, Shambala, Beatherder, Sunrise, and GreenMan to name just a few.

Driscoll, an innovator of live looping, creates the soundscape of a live band utilizing beatbox loops and multi-instrumental grooves. He was a pivotal part of the One Taste collective whose alumni include Jamie Woon, Little Dragon, and Portico Quartet. He has collaborated with artists like Arrested Development, Rodney P& Skitz, and dancehall legend Spragga Benz. Driscoll has received Radio One airplay, appeared on Sky TV, and received the U.K. Indy award for Best Solo Act. The first remixes are from Mr. Benn, adding his signature summery reggae hip-hop flavors, and Don Hendicutz taking it back to the old school with his aptly titled ’93 remix.

“Gangsta got an iron lung”- Cee-Lo Green
“He blasts through stereotypes. Pure style and creation. You need to hear him.”- Subba Culture
“If you are looking for innovation, check this guy out.”- Scratch from The Roots
“Rooted in the American folk tradtion a la Bob Dylan, but joining the dots with that most modern of folk forms, hip-hop, he’s guaranteed mythic status for years to come”- DJ