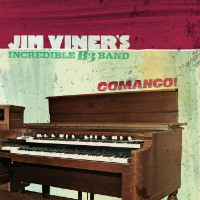 Jim Viner’s Incredible B3 Band? Hmm – ‘Viner’, ‘Incredible’ ‘Band’ – reminds me of something…nope…It’s gone. Just kidding. This is the promising new project from Jim Viner, formerly sticksman for Iowa deep funk outfit The Diplomats Of Solid Sound, whose current crew, as the name indicates, are all about the Hammond B3-led cuts of which Comango! provides no fewer than twelve with a firmly southern soul vibe.

That’s not to say there isn’t any material that Michael Viner wouldn’t appreciate and for evidence of which check the multiple percussive layers of uptempo funk bump El Kabong. Of course, given the presence of the B3, unlike the Bongo Band’s efforts, this LP doesn’t mainly consist of cuts packed to the gills with bongo breaks and melodies that sound a little bit like the BBC’s Grandstand theme. Stank uptempo shaker Chicken Tickin’ is Booker T-flavoured for example while Borracho No-No imagines The Meters – if they’d come out of Memphis. There are breaks aplenty of course – for which see Jabo’s Time which also pays homage to the intro from the Charles Spurling and Hank Ballard-penned Unwind Yourself while two of the best cuts are the funky opener and title track and its clap n stomp successor Forty Twenty. These two firmly establish the LP’s largely upbeat tone though there’s still time for the strings-laden, smouldering keys of moody slow-burner St Paul. Personnel consists of Viner himself on drums, no fewer than two Hammond players and two guitarists, a saxophonist, percussionist and a man in charge of strings – a line-up which includes no fewer than three current members of The Diplomats Of Solid Sound. Comango! then – or as I like to think of it (Diplomats of Solid) Soul Dressing.