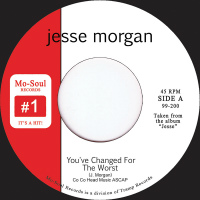 By the late-seventies funky soul was already running scared from disco. Though aid was about to arrive in the form of the first wave of hip-hop, there was still time for some epic rearguard action from funky soul itself however and righteous boogie-tinged, 1978 stomp You’ve Changed For The Worst from former Mopp Topp, Jesse Morgan, was an example. Or it would have been if a last minute major label takeover of ABC Records hadn’t resulted in this single being shelved. For the best part of f.o.r.t.y. y.e.a.r.s. Forty! Christ! Luckily funk heroes Tramp Records have done the moral thing and are finally bringing the goodness to light on 45 for Record Store Day. The flip’s pretty nifty too. You do know what to do right?
(Out 25 March on Tramp Records)

Posted on 19th February 2016 no comments