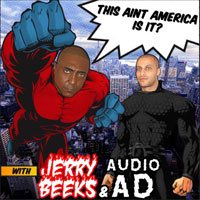 When Bronx native and genuine microphone fiend Jerry Beeks brought out his first album The Crop Report I thought, ah yes – this man’ll go far. Said piece of wax was a cracking slice of inventive boom-bappery and inspired, humorous lyricism, featuring such bangers as Falling In Love With A Stripper and The Bu Ku Dinky Dow. After a couple of years had passed with no sequel turning up, I tried to track the man down on Myspace (yeah it was that long ago) – and pestered him for a bit. There was some guff on his page about how he’d disappeared in Africa whilst helping starving orphans or something. Which means there’s been no follow-up for ten. Fucking. Years. Until now.

Apparently Beeks hasn’t been lying dead in a shallow grave on the dark continent. I’m not sure precisely what he’s been doing all that time (round fellow hip-hop absconder Fakts One’s gaff on the Playstation perhaps) – but recently he’s been making a hot shit second album. As native of the ‘home of hip-hop,’ the Bronx, naturally there’s only one place a microphone fiend like Beeks would look for a man to make his beats. That’s right – the UK. And why not? Every trans-pond hook-up I’ve heard lately (Craig G and Danny Spice’s recent effort for example) has been the daddy. Enter hip-hop head and funk fiend, Audio Ad – originally Beek’s tour dj. The result? A collaboration that has borne fruit in the shape of This Ain’t America Is It? eleven tracks of soul and funk-sampling fat shit and quality Bronx rhymes.

Obviously something this good should be sold for actual money, recognition should be given and our transatlantic pair should be stacking Benjamins. How old-fashioned. As it is, not only is this excellent eleven tracker available for free (see below) but it’s only been coyly languishing on the producer’s blog and literally one or two other sites for the last six months. This Ain’t America Is It? is yet another reason why this year is the return of the boom-bap. Best track on the LP is Across The Moor which I’m assuming isn’t a reference to either Othello or Bodmin. Album DL link here…

…title track on the player below. Did I mention another undergound emcee legend and former Wiseguys collaborator Sense Live is on three of the tracks too?

Jerry Beeks and Audio Ad – This aint America is it? by Audio Ad

(PRESS RELEASE)
Back on the Grind, Jerry Beeks returns with his long awaited second LP This Ain’t America is it? The Bronx Native has teamed up with the UK’s Audio Ad for Production and DJ duties to create an Album that looks back to the Golden Boom Bap era of Hip Hop, whilst still moving forwards creatively. The Duo are releasing the album for free digitally to reconnect with Hip Hop Fans and stake their claim in the modern musical arena.

Beeks’ 2001 debut recording The Crop Report (Wall of Sound/Bad Magic) gained critical acclaim and Audio Ad became his DJ for the Promotional Tour. They made contact again over the web and Ad soon became Jerry’s Go-To Guy for the beats on this new project.