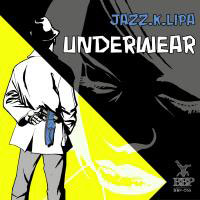 Have you had the chance to check out Jazz K.Lipa’s Underwear? I’m not on about his collection of man-thongs of course, rather his latest drop Underwear. This time around he’s got his electro-ish-funky breaks on and employed fellow countrymen Smith & Smart to provide lyrics where each wishes that they, “had a pump gun in my underwear,” whereas, sadly, they’ve only got “a pistol” – which the listener can “reload” (should they feel inclined) and Smith & Smart “wouldn’t care.” Hmm …Germans …underwear… suggestive references to ‘weapons’ in said underwear? God only knows if they’re conforming to type or sending themselves up – it’s hard to tell with that deadpan Teutonic delivery. Comes with three ghetto funk remixes courtesy of DJ Soo, Calagad13 and JiggyJoe and a breaks rerub from Gyorgy de Val, none of which beat the original for a sense of Central European sleaze.
(Out now on Breakbeat Paradise)