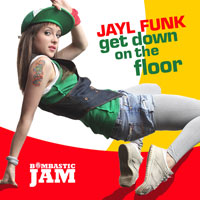 Jayl Funk’s latest, Get Down On The Floor, is a new original funky breaks number that should keep him out of the slammer for the foreseeable future. During it JF aims to get the listener ‘down on the floor’ by making quite free with what sounds like Vernon Burch’s Get Up (all late seventies slap bass and a Cameo-style break) and adding in a bit of contemporary female vocals and some distorted guitar. That ought to work. Label boss Basement Freaks gets all ‘now’ on your ass with a moombah rework but can’t resist having a second crack at the whip with a funky version that makes use of more frantic percussion than the original and then Smoove & Turrell bassist grabs the track by the bass (what else?) and gives it a bit of a wobble. Well – it’s what all the kids are doing…
(Out now on Bombastic Jam)

(PRESS RELEASE)
Holding down the funky breaks scene in Europe right now is one of the top artists representing the label. Jayl Funk is back again to firmly cement his name in the game once and for all with his new storming release on Bombastic Jam “Get Down on the Floor”. The package consists of one of the most solid originals to date on the label, accompanied by 3 dope remixes – 2 of which coming from the man behind the label; George Fotiadis AKA Basement Freaks – A factory standard funky number straight outta the freaky basement, and a world first Basement Freaks Moombahton remix – George quickly catching on to “whats what” in music, as Moombahton is fast gaining a solid fan base with its popularity taking the electronic scene by storm worldwide. Tim McVicar steps up to the plate reworking the final remix on the release with a massive Ghetto Funk jam, which will be sure to be heard for a long time coming in clubs and festivals globally.