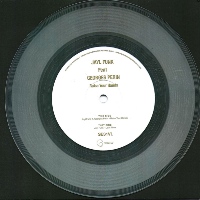 Raise your hands in the air for the funky new disco single from Jayl Funk featuring Franco-Greek singer Georges Perin.  Initially only available on vinyl 7″ via Bandcamp, the track features an A-side entitled (what else?) Raise Your Hands and B-side Love Time.  The former kicks off with a soulful call to ‘Raise yo’ hands,” before scratching into a repeated chant of ‘boom-shaka-laka’ swiftly joined by claps and guitar chanks.  Before you know it, the party is rocking to a syncopated mirrorball groove adorned by one Mr Perin throwing his voice all the way up to falsetto and back down again.  Had enough?  Course you haven’t!  And that is is why flip Love Time keeps it a bit disco-y, a bit funky and – even if sans Perin – comes with suitably slick female vocal instead.
(Out now HERE; global digital and wax release to follow on Sound Exhibition Records)
TEXT COPYRIGHT: Stone Monkey/ monkeyboxing.com (2021)