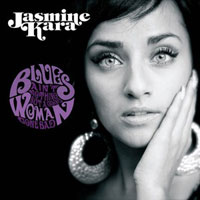 Swedish/Persian singer Jasmine Kara finally gets a physical UK release for her debut album with it’s Marlena Shaw-referencing title Blues Ain’t Nothing But A Good Woman Gone Bad then. And when I say ‘finally’, this must have been kicking around for anywhere up to two years behind the scenes since official videos for two album tracks were up on Youtube a year ago and another one was up a year before that. Plus it’s been available on iTunes since the autumn. Maybe it was a legal thing – what with herwhole album seeming to consist of covers of tracks released on Chess Records back when it was Chicago’s answer to Stax and Motown. Mind you, given that it seems to have been Marshall Chess (son to Leonard Chess and nephew to Phil who founded Chess Records) who put her up to this, you’d think that wouldn’t be a problem.

Now – about that whole covers thing…Surely trying to improve on the vocals of Etta James and Marlena Shaw is somewhat pointless especially if all you’re going to do is straight covers i.e. omitting to do anything significant with tempo, arrangement, instrumentation and the like? Well – yes and no. It’s hard to argue with the range or power of Kara’s voice and she keeps it gospel raw rather go for any modern rnb diva-esque theatrics, while her band do the full retro session thing . So that’s a plus. Secondly, you’ll have a bit of trouble finding the originals of any of these cuts on wax nowadays anyway – and trust me, I know, because I looked for the James/ Desanto version of In The Basement last autumn and even shitty old scratchy copies were going for banker’s bonus figures. Thirdly, she doesn’t just do straight covers – because Try My Love Again (another track that apparently has been or will be a single) is not only the best track on the album but a stormingly upbeat sixties ska version of the old Bobby Moore & The Rhythm Aces moody midtempo soul burner. The main thing you should be worried about is – if you buy this album now – will it transpire that you have bought the first album by the next Duffy, the next Adele or the next Amy Winehouse this time next year? Let’s hope it’s the latter – hopefully her too-cool-for-school label Acid Jazz have a vested interest in marketing it so that it’s not either of the other two. Full album preview below, track preview of Try My Love Again below that. Enjoy.
(Out now on Acid Jazz)

Posted on 5th February 2012 no comments