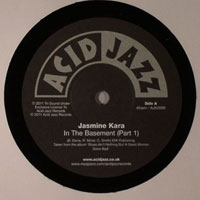 With various funk labels spewing out the white boy jazz funk in the last couple of years there was only really one thing for the label best known for that insidious practice to do. Start releasing dirty soul and funk. Thus it is that I find myself not only praising an Acid Jazz release but also comparing this cover of Etta James and Sugar Pie DeSanto’s classic In The Basement favourably with the original. The spectacularly-voiced Jasmine Kara performs a version that isn’t wildly different – slightly heavier and faster – but nonetheless a dead ringer for a sixties soul session 45. Dunno what’s going on with the release schedule for this – the single’s only just dropped in the UK but at least one more single and an album are out elsewhere. Off the hook singing, peerless production and a b-boy-featuring video (albeit complete with some Ali G choreography – check the moves at 2 mins 39 below) should imbue Kara’s career with a credibility that prevents it ending up where Duffy’s has. In the basement.
(Out now on Acid Jazz)

In The Basement by Jasmine Kara