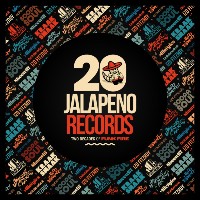 An artist roster like that of Jalapeno Records does tend to render idle boasting superfluous, so when they entitle a compilation to celebrate twenty years as a going concern Two Decades Of Funk Fire, you’d better believe the hype. How is it ‘funk fire’ though? Let me count the ways. Firstly, there’s one track for each year of the label’s existence. No need to ‘scour’ the vaults though – you could pretty much throw twenty darts at the label’s entire discography and hit dope each time. So secondly, this draws from pretty much the full range of releases since the label’s inception. You’ve got old gold such as the spacey cinematic trip-hop of Ikon’s The Dove and Kraak & Smaak’s own remix of their nu-disco breakin’ gem Money In The Bag both from ’03 and then you’ve got bang up to date stuff – not least of which is The Allergies’ old-soul-re-booted party breaks banger, Felony. Oh – and let’s not forget the seventeen other cuts from every point in between, a kaleidoscopic array including funky breaks from Soopasoul (the JB’s-ish If It Ain’t Funky Back It Up), pulsing breakbeat soul (Flevans It Just Goes feat. Sarah Scott), ‘northern coal’ from Smoove & Turrell (Crown Posada highlight You Could Have Been A Lady), sixties-influenced R&B (Alexia Coley’s Drive Me Crazy), hip-hop (The Allergies feat. Andy Cooper on speed-rap Rock Rock), world music breaks (Radio Trip’s Hashish feat. Boom Pam), and the sweeping cinematic breaks n strings of Beekeepers closer Apiculture.  Then of course, there’s the third reason.

The third reason is that the label are releasing ten of the compilation’s tracks as a ltd. vinyl 7″ boxset with an accompanying download code for the full twenty-track digital comp. Which brings us to the fourth reason: for three of the cuts on wax, (The Allergies’ Felony and Smoove & Turrell’s Slow Down and Soopasoul’s If It Ain’t Funky Back It Up) it’s another chance to acquire a pair of hard-to-get-on-45 cuts. Arguably the fifth reason will have 7″ fiends salivating even more though since it’s a case of ‘first-time-on-45′ for the remaining seven tracks. Step forward Basement Freaks’ Knight Rider-meets-Indeep-meets-Jamaican dancefloor style affair Hit The Flame, Skeewiff’s Quincey Jones cover Soul Bossanova, Kraak & Smaak’s Squeeze Me feat. Ben Westbeech, the slow burn slow groove of Ephemerals’ You Made Us Change, Dimitri From Paris’s remix of Izo FitzRoy’s I Want Magic, Dr Rubberfunk’s Stax-ish Northern Comfort feat. John Turrell and one more. For the monkey, the sixth reason the comp. is fire is that, finally, after years of waiting, the scorching big-band stank of You’re All Show, Aldo Vanucci’s Kylie Auldist-featuring bomb (originally released digitally on 2012’s Love Is Loops EP) and of all the album’s twenty cuts, arguably the one that is ‘funk’ in the truest definition of the word), is finally available on 45.  Not just the monkey’s favourite Aldo Vanucci track ever but probably the monkey’s favourite Kylie Auldist track ever.  Perhaps we’ll never know if the monkey’s relentless badgering (I promise I’ll stop now!) of anyone connected with the label for a 7″ of this played a role here. One thing’s for certain –  don’t sleep.
(Out 27 November on Jalapeno Records)

Posted on 21st November 2020 no comments