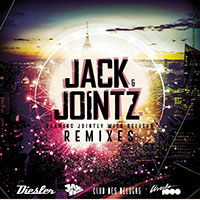 New from the Fatherland’s ChinChin label is this drop from Jack & Jointz who must be beaming with delight at the idea of getting remixes of four tracks off last year’s debut LP – er – Beaming Jointly With Delight, three of which come from the likes of Diesler, Ursula 1000 and Club Des Belugas. This crew of reprobates are respectively jazz-discoing with delight, electro-boogie-ing with delight and – ahem – housing with delight on (again respectively) the Ashley Slater-featuring Flip, the Judith Menner-featuring Shy Girl and the Ashley Slater-featuring (again) Running Life. Grinning like a Cheshire cat with delight however is Jayl Funk whose funky breaks lift the Scarlett Quinn-featuring Don’t Le Me Be Misunderstood nicely. All that and you also get a radio edit of Don’t Le Me Be Misunderstood. Chin-chin!
(Out 7 April on ChinChin)