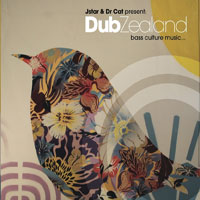 It says here that the tracks on Dub Zealand, “highlight the surprising relation,” between the islands forming New Zealand and Jamaica. ‘Surprising’!? Given the Olympic quantities of weed smoked in either nation there’s little to be surprised about. Jamaican marijuana consumption is, of course, legendary but I’ve actually been to the ‘land of the long white cloud’ and they’re just as bad over there. There’s clouds all right. Of bong smoke. And where weed is, dub reggae follows. Enter dub-connoisseurs J Star and Dr Cat. Both of them are London-based so one can only speculate about their business down under. Perhaps they were interested in the source of certain ‘clouds’ which seemed coincidentally to appear above the people who created the building-threatening basslines on this release – for it would seem that plate tectonics isn’t the only cause of seismic activity in Australasia, on the evidence of Dub Zealand. In as far as dub reggae can be varied (and I recognise the heretical nature of this comment to the hardcore dub aficionado) this release offers pretty varied fare ranging from traditional old school dub reggae to tech-edged stuff and one track that verges on the dubstep.’ There’s even an offering from Messrs Star and Cut themselves in the shape of final track Blessting. One drop that the rockers and steppers ought not to miss out on this year then…see what I did there? Audio below, EPK below that and press guff below that…

(PRESS RELEASE) Enter the echo chamber that is “Dub Zealand.” An original journey into Aotearoan bass culture via the versatile sensibilities of the Kiwi ear. Fourteen diverse musical tracks highlight the surprising relation between the two
islands forming the “Land of the White Cloud” aka New Zealand, and that other hot
spot of bass vibrations in the Caribbean; Jamaica.

From this musical puzzle comes the worldwide class of the Black Seeds, the heavyweight Dub Terminator, the dub n’bass of Rhombus in Dub and the roots fidelity of Unitone Hi-Fi – yet another artist who has claimed international recognition. International Observer goes exotic via the Bombay Dub Orchestra remix, newcomer Jefferson Belt provides cosmic visions of the world, and Tiki Taane holds it down on a deep remix of Knights of the Dub Table. More digital science follows from Pitch Black, The Nomad, Deep Fried Dub and Sola Rosa to a very smoky mix of Katchafire’s “Collie Herb Man” that looks at Kingston Town straight in to the eyes.

Dub Zealand; a full immersion in the world of “Dub-down-under”, coordinated with
passion by Jstar and Dr Cat.

The Limited Edition CD’s feature sensational artwork from NZ’s Cut Collective. So whether your on the beach, up a mountain, stuck in a traffic jam, Dub Zealand
will uplift you, feel you, stimulate you, and you will keep coming back for more!!!!
Music lover Jstar’s reggae & hip-hop mashups have found their way into DJ’s record boxes & dance floors worldwide. Productions for DJ Vadim, Sonny J , Madness, Black Seeds, The Resonators and more have his services in high demand! Current bass heavy remix projects + DJ sets have evolved into dubstep, D&B, electronica and in between…..After inspirational trips to New Zealand, now joins forces with ‘Dr Cat’ to compile the ‘Dub Zealand’ CD

Luca Gatti (aka Dr Cat) is a keyboard player, composer and producer, a long-
standing and respected figure in London’s underground electronic music scene.
Luca has journeyed the musical world as a touring musician & studio producer, lent
his services to movie soundtracks, collaborated with international artists and worked alongside Asian Dub Foundation and English National Opera in the making of a West- End show on the life of colonel Gaddafi. His extensive discography is a testament to his eclecticisms and versatility.