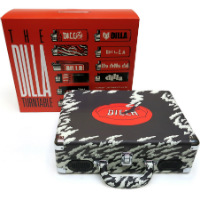 He might sadly have left us over a decade ago but James Yancey (a.k.a. the man known far and wide as Jay Dee or J Dilla) still casts a long shadow over hip-hop and the wider music scene. A bit like vinyl really. So what better way to acknowledge this legendary producer than via a Dilla-themed suitcase turntable? Man – that almost sounds portable! Well durr – that’s why it’s in a suitcase!

The device has been fully sanctioned by the estate of Mr Yancey and hipsters everywhere will be overjoyed to hear that it doesn’t just play 33 and 45 but also 78 and comes with full range, dynamic stereo speakers, a headphone jack, replacement stylus and a 45 adaptor. If that’s too vintage a spec. for you, you’ll be pleased to hear that while it functions as a portable standalone record deck, you can also plug into any stereo system that accepts an RCA jack or a USB input and record vinyl sounds directly to your computer since it handily comes with a transcription software disc. Oh and artwork by Mason London. Oh – and an exclusive Madlib-produced Nas-featuring Dilla 7″ – The Sickness. But is this news – it’s been all over Stateside websites since the autumn? The answer is ‘yes’ because now you can get it this side of the pond for a very reasonable £120 squid HERE. Any sting in the tail? The usual one with US imports – rather than convert the dollar price to sterling, the numerals have stayed the same and the dollar sign switched for a pound sign. Well that’ll be things like import and export duty won’t it? Most likely. Suspicious how it always ends up being exactly the same digits, despite being in a more valuable currency though isn’t it..?

Posted on 6th February 2017 no comments