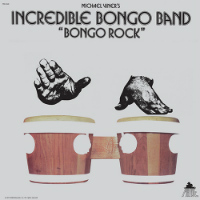 Was a record label ever more perfectly paired with a release, than this? Surely not, as funk/ hip-hop/ breaks label Mr Bongo gear up for the second massive re-release to arrive in the monkey’s inbox in a week – the fortieth anniversary edition of the Incredible Bongo Band’s Bongo Rock. Everybody knows their cover of Apache of course (dubbed the ‘national anthem’ of hip-hop by Kool DJ Herc) and one of the funk’s most-sampled records but actually the whole LP is in the running for most-sampled funk LP. Even if you don’t know all the tracks on this, trust me, you’ve heard bits of every single one of them appropriated for use somewhere else. Pretty amazing when you think that MGM record artist manager and exec Michael Viner threw the band (also known as Michael Viner’s Incredible Bongo Band) together to provide a soundtrack to a little known B-movie.

It’s not even like the Bongo ‘Band’ was proper a band either. Since Viner was handily able to use the MGM studios during downtime, he grabbed anyone he could lay – er – hands on to help him with the project, including a couple of members of The Jazz Crusaders, a former member of Donald Byrd’s band and, according to legend, even Ringo Starr on a couple of tracks. The result was an eight-track collection consisting of five bongo-drenched covers (Let There Be Drums, Apache, In-A-Gadda-Da-Vida, Raunchy ’73 and Bongo Rock ’73) and three bongo-drenched originals (Bongolia, Last Bongo In Belgium and Duelling Bongos). Did I mention, there are a lot of bongos on this…? Anyway, now’s your chance to cop it (or cop it again) on 180 gram heavyweight vinyl, in Japanese sleeves, as it would have first appeared in 1973.
(Out February on Mr Bongo)

Posted on 9th February 2014 no comments