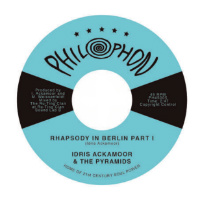 Arising phonenix-like after over three decades, Idris Ackamoor & The Pyramids re-released their three privately pressed 70s LPs a while back and then did a European tour in 2010. As if that wasn’t enough, they then went and released a new LP in 2012 and now there’s this new 45. Rhapsody In Berlin – for such is its name – is a slow burning slice of afro-instro-funk complete with a Watermelon Man-ish use of the pygmy flute, though while Herbie Hancock’s number was all jazzy sophistication, you’ll find this release on Max ‘Poets Of Rhythm’ Weissenfeld’s label a little more of a walk on the wild side.
(Out now on Philophon)