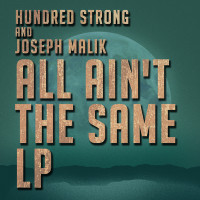 Bristol beat-head Ben Dubuisson hooks up his Hundred Strong project with fellow bass cadet Joseph Malik on their All Ain’t The Same LP. All Ain’t The Same? Wasn’t that a 12″ by Hundred Strong and Joseph Malik from about nine years ago? Yeah, alright – who made you the quick release album police? You need to get off that urgency trip, man – it’ll be much easier on your constitution. We’re talking blunted beats here and both of these two have roots in the sound of early Bristol bass/ trip-hop (gahh, don’t call it trip-hop!)/ Mo Wax/ scene of the early nineties. Dubuisson released material as Purple Penguin with dj partner Scott Hendy while Malik appeared on an early Mo Wax comp as MF Outa National with his mate AJ. And that blunted soul tradition continues on LP All Ain’t The Same.

The eight tracks on the album all feature Malik’s smooth soul vocals (with an occasional appearance from Lou Angel) over mellow breaks on a late night tip. A warm and summery late night tip. In bed. With your old lady. Who, frankly, is going to love this – especially numbers like Out Of Time and Good Man. It’s all about the title track and double-bass powered cuts like Slip My Mind and Country Yard for die-hard trip-hoppers though.
(Out now on High Noon)

Posted on 27th February 2013 no comments