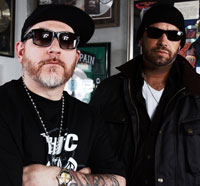 Fifteen years after they split up, the ‘Irish’ (by which I mean American) hip-hop crew House Of Pain return to celebrate the band’s genesis twenty years ago which will no doubt involve a bit of jumping around. Or at least bending the legs rhythmically – you’ve gotta watch your knees past forty apparently. Admittedly, this post will be of little use if you don’t live in the USA but if you do, or are going to be in one of the states they’re visiting – it might be worth a look. Checking out the dates they seem to be sticking mainly to places where it’s sunny and warm (well, you would wouldn’t you) eventually heading north in April and even crossing the border once it’s warmed up a bit. For those who weren’t old enough to ‘Jump Around’ the first time check the Brucie bonus vid below and even if you were old enough you may wish to ponder once again why anyone would want to deny themselves pork and bacon simply because the constabulary are colloquially referred to as ‘the pigs.’ Still, them horns at that start…

EVERLAST and DANNY BOY are kicking off the 20th anniversary of HOUSE OF PAIN in style! That’s right, for the first time since their split in 1996 the duo is teaming up once again for the “He Who Breaks The Law” world tour that is sure to be one of the most anticipated of the year. The US leg of HOUSE OF PAIN’S 20-year celebration will kick-off in March and sees the storied group on their first proper tour since reuniting last year for their highly praised reunion at KROQ’s Epicenter event alongside Eminem and KISS, amongst others.

“The catalyst of this whole thing was the KROQ show,” EVERLAST explains, “We left Epicenter and immediately started putting this whole thing together. We’ve been reading messages from the fans who wanted to see it; but once you see a crowd that size go crazy and sing along to every word, you know it’s time to do it. We want to give the fans what they want!”

“It’s been 20 years in the making and long overdue! Back to the House of Pain 2011 tour Let’s go!” added Danny Boy O’Connor.