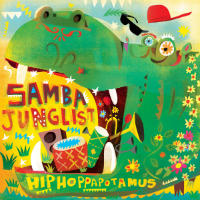 Not typically within the monkey’s remit, junglist pressha does occasionally make a fleeting appearance on MB as part of remix packages or when there’s a heavy crossover with funk, soul, hip-hop, reggae and breaks as in the case of Hiphoppapotamus’s Samba Junglist EP. Broadly under the drum n bossa or, more accurately, the sambass umbrella (yes, they’re both really a ‘thing’) our man flips the tempo on The Spinners’ 70s classic It’s A Shame and flips the rhythm Brazil-wards. Fellow breakbeat adventurers Bear Twists and Waggles join in the fun on Golden Boys for carnival fun (it’s unclear if they stripped down to thongs and feathers for that one though but anything is possible) while the title track alternates between full and half-time tempos. However, it’s the mellowest track, Summertime, that round these parts, is the pick of the bunch as Helena May turns out a very tidy cover of the Gershwin track of the same name which gets rendered inna very 90s Alex Reece/ London Elecktricity stylee by our man’s beat. Altogether now – stop! Samba time!
(Out now HERE)